Too hot to haunt

The Wedding Ghost cannot cope with the heat - and has departed. 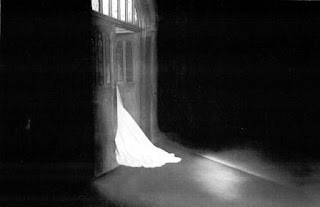 There will be more eeriness when the weather is cooler - and spookier. 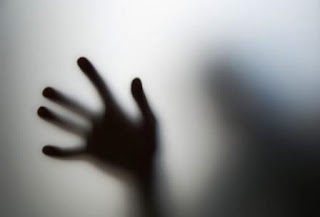 Where I live in Sussex, some people have either wood or coal fires - and a chimney sweep offers his services in the Local Rag (it really is called that). He also offers 'wedding attendance'. If you're not from the British Isles - or not familiar with our more obscure customs, this might be a puzzle.

"The chimney sweep, by virtue of his blackened face and his connexion with fire and the hearth, is a very lucky person to meet by chance"

It was customary to bow or greet a chimney sweep 'in his blacks' - that is to say, when still grimy after his work. In some places, people would spit and make a wish. Apparently, chimney sweeps in Poland and Croatia wear all black and are thought lucky too. You touch a button to attract the magic.

But the luck only worked if he was coming towards you.

This especially applied if a chimney sweep in his blacks should meet a bridal procession. Ideally he should turn and walk along beside the bride to bring her extra good fortune. If he had his back turned, that was a very ill omen. 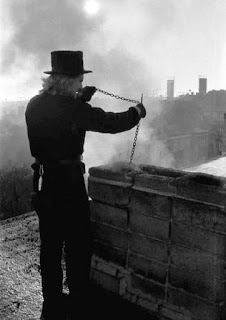 So nowadays people sometimes hire sweeps to come to a wedding, bringing their good luck with them.

I wonder if 'the virtue of the blackened face' is another reason for black-face morris men?  It is usually explained as a disguise - and most certainly is not racist unlike the Black and White Minstrels - but perhaps there is an element of black as a colour associated with fire and hearth magic. 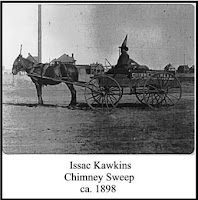 After all, the hearth was where domestic rituals took place - and soot would be a product of such magical processes as making bread or smelting metal. Soot collected from your hearth could be used in spells against you, it was once believed. Soot could be made into a form of ink to create sigils and other magical writing -even tattoos.

So inviting a sweep to your wedding would seem like a good idea. If nothing else, it makes a good photo opportunity.

K.M.Lockwood
West Wittering, Sussex by the sea, United Kingdom
- a writer besotted with the sea. Add some British folklore and I'm even happier.